The number of people in work in the UK has reached a record high of 32.54 million, latest figures from the Office for National Statistics show.

Unemployment was flat, with a small increase of 8,000 between September and November for a total of 1.37 million.

Average earnings excluding bonuses increased by 3.3% in the year to November, as wage rises continued to outpace inflation.

ONS head of labour market David Freeman said: “The number of people working grew again, with the share of the population in work now the highest on record.

“Meanwhile, the share of the workforce looking for work and unable to find it remains at its lowest for over 40 years, helped by a record number of job vacancies.

“Wage growth continues to outpace inflation, which fell back slightly in the latest month.” 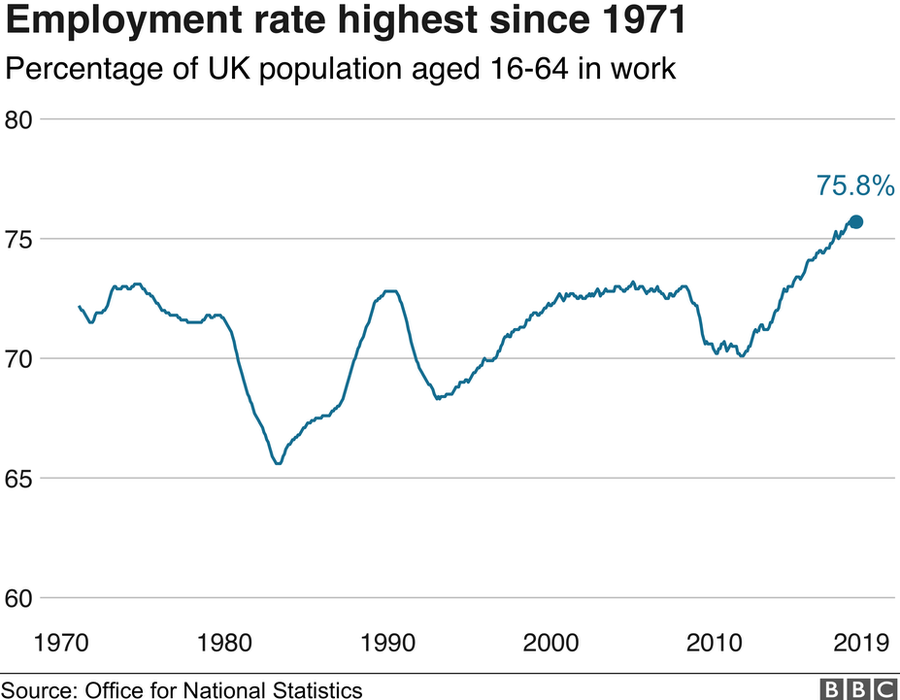 The increase in both unemployment and employment is explained by the UK’s rising population and fewer people being classed as economically inactive, which includes those on long-term sick leave, students, and people who have given up looking for a job.

Reality Check: Has immigration held down wages?
Inflation falls to lowest level in nearly two years
Reality Check: Can you be ’employed’ for one hour’s work?
Employment Minister Alok Sharma said: “Our pro-business policies have helped boost private sector employment by 3.8 million since 2010, and as the Resolution Foundation’s latest report shows, the ‘jobs-boom has helped some of the most disadvantaged groups find employment’, providing opportunities across society.”

Andrew Wishart, UK economist at Capital Economics, said the figures were “reassuring, showing no sign of any hit to firms’ hiring ambitions due to Brexit”. 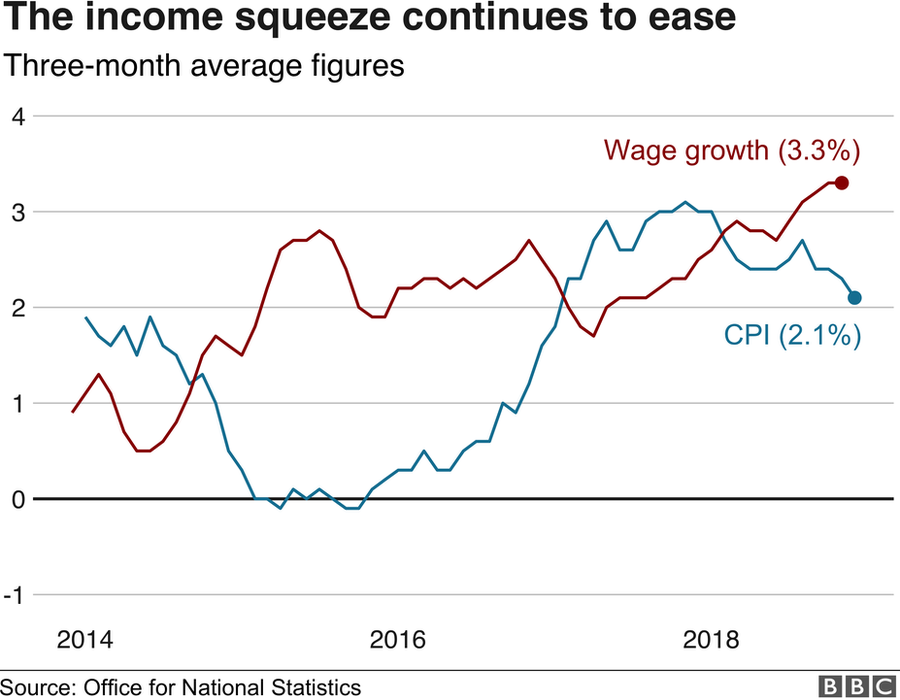 However, Samuel Tombs, chief UK economist at Pantheon Macroeconomics, warned that the pace of wage increases may begin to ease.

“We doubt that wage growth will be sustained over the next six months at November’s strong rate,” he said, “Pay settlements likely will weaken this year, as the previous year’s inflation rate usually is the starting point for negotiations.

“Nonetheless, the labour market now looks tight enough to ensure that wage growth does not slip below the 3% mark.”

At first blush the most surprising thing about the jobs market as portrayed by the latest figures from the Office for National Statistics is how robust it is.

All this talk of Brexit uncertainty and yet employers continued to take people on. The number in work and the proportion in work continued to hit a new record – as it has done now, more or less continuously, for years. And the bulk of the new jobs were full-time; there are now a record 24 million full-time jobs in the UK.

Is the jobs market simply ignoring all the Brexit-induced political chaos?

Does this confirm suspicions that warnings of slower growth owing to the prospect of a no-deal Brexit was merely Project Fear?

The answer to the latter question is “no”, and to the former “we don’t know yet”.

The key is that jobs figures trail the rest of the economy.

Firms that took people on in the September to November period will have decided to do so in the summer, when confidence was higher and the politics less fraught.

So we will still have to wait a few months to know if Brexit uncertainty has hit the jobs market or not.

Tej Parikh, senior economist at the Institute of Directors, said the employment figures may not be a marker for any possible interest rate rises.

“The Bank of England will be little moved by today’s data. While the momentum behind wage growth may build support for interest rate hikes, Brexit remains the spanner in the works for the monetary policy committee,” he said.

Public sector net borrowing, excluding state-owned banks, was £3bn in December, which was higher than expected and up £300m from the same month a year earlier.

Borrowing in the current financial year-to-date was has now reached £35.9bn, £13.1bn less than in the same period in 2017 and the lowest year-to-date figure for 16 years.

However, analysts said that on current trends, borrowing was set to exceed the £25.5bn forecast by the Office for Budget Responsibility for the 2018-19 financial year as a whole.

“Much will depend on whether an expected marked pick-up in corporation tax receipts materialises and how well the economy holds up over the first quarter of 2019, particularly given the current heightened Brexit uncertainties,” said Howard Archer, chief economic adviser to the EY Item Club